“We don’t know who we can be until we know what we can do.” – Sir Ken Robinson

(This was originally guest-posted as an “A-Ha Moment” on  Blogging Through the Fourth Dimension.  With all the talk about how we changed our awards ceremony to focus on ALL our students’ strengths, I felt now was an opportune time to cross post.  Thank you to Pernille Ripp for the opportunity to share Daniel’s story.)

How can we truly see the potential of our students if we fail to provide the environment to bring out their talents?

I have always wanted to be a high school teacher and I was exactly that for 7 years. You never know where your life will lead you and, while completing my Master’s Degree, I was offered the opportunity to work with an amazing principal at an elementary school. Roxanne taught me to seek out the strengths in people and bring these talents out from within and opened my eyes to the power of strength-based, rather than deficit-based, teaching and leadership. My aha moment came in my first few months of being an elementary school teacher and a new vice principal.

When I did the tour of the school I was to be a teacher/vice principal, I met Daniel (pseudonym). Daniel had a smile that was contagious but was disengaged and struggled in school; the reason I met him that day was that he was in the hall after being asked to leave class. I never asked him why he was in the hall, I just started asking him about his life outside of school; we talked about music and friendships in the few moments we shared together on that day.

The next year, I was to teach a 5/6 class (in addition to the vice principal duties) so when we were creating the classes, I requested that Daniel be placed in my class. To be honest, in the first month, I really struggled with the transition from teaching 17 year-olds to teaching 11 year-olds. Many of the students had behaviour, social, emotional, and academic challenges so I spent many hours bouncing ideas off Roxanne and other teachers trying to find out how to reach these kids. I specifically started to talk about Daniel as he was so withdrawn in class – always refusing to take part in any learning activities and that smile that drew me to him seemed to have disappeared. She asked me what I knew about him; the truth was that I knew very little about him other than he struggled in class and liked music. She encouraged me to find out more about him; find out what he loved, what he was good at and try to bring that out in him.

During the next week, I spent a recess having a snack with Dan. I found out that he lived in a nearby community in which he spent two hours on the bus each day, lived with his Grandmother because his mother was far too young, and we shared a common interest in Johnny Cash. We spent much of the recess singing a variety of Cash songs and just laughing. Later that day, I was speaking with the First Nation Support Worker (Nelson), sharing with him about the moment that had occurred, and he let me in on another strength of Daniel: First Nation drumming and singing. He said this was something that he recently witnessed in his community but maybe something that we could support. The FNSW asked me if he could take Daniel and a few others to work on this interest; I believed this was a great opportunity so for 2 weeks, Nelson spent a few mornings a week drumming with Daniel and two others. What progressed after this changed the way I teach and live my life.

I asked Daniel if I could come watch one recess. I was blown away. Daniel was so into the drumming and singing that he would actually be sweating with pride as he was doing this. A few weeks later, I asked him if he could perform for our class – he unfortunately declined. Nelson encouraged him to sing and drum with him in front of our class. He nervously agreed and blew us all away when he performed; other students cheered when he finished and then asked if they could be part of “his group”. Daniel was now not only working with his strengths but also leading others to do the same. His group added girls and grew from 3 to 6 and then 8, including 2 students from another class. They played for our class every Monday morning, to start our week, and every Friday afternoon, to finish our week. They even gave themselves a name, Sacred Connections, and began to play for other schools and community events.

The moment that brought me almost to tears was right before Christmas. Each week, 1-2 new students would join up front in the singing and drumming. We often don’t see the impact of small changes but right before Christmas, the group actually had no people to play for, because every single student was up there singing with Daniel! To create an audience, I invited Roxanne and a grade 4 class to come and see the performance. We all sat there in awe of what Daniel had done not only as a performer, but also as a leader.

The other parts of Daniel’s school and life were drastically changing too. His friendships grew, his efforts in school improved and he became very engaged in learning activities. His reputation grew as a leader in the school and community and his group was asked to play at a local pre-Olympic Games (2010) event and in the spring he was asked to perform with Pow Wow drummers at a huge event in front of our entire school and community! Daniel had gone from a disengaged, quiet student who refused to take part in the learning to a proud leader and confident learner in our school.

Daniel leading the "Welcome Song" to start our week.

That year was one that changed my life. It was not just one aha moment but a series of moments that shaped me as a person. I want to thank Roxanne, Nelson, and most importantly Daniel for teaching me that, as educators, the most important thing we can do is provide the optimal conditions for people to grow, bring out their strengths, and truly flourish.

Rather than only recognize those select few award winners at the end of the year, we need to honour every student every day.  Every child has a strength and passion within him/her; we need to help EVERY student to find this and excel in his/her own way.

Here are the comments that the person who taught me the most about this, Dominic (Daniel). 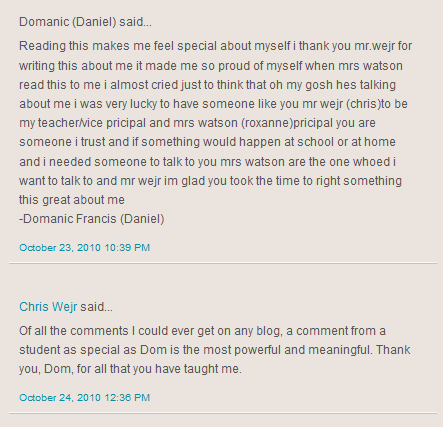