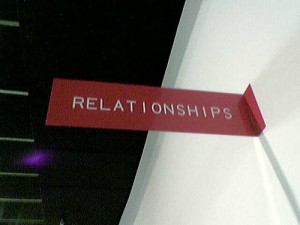 I am thrilled to have a former student, Kenny Kou, write a guest post on my blog.  Kenny and I have been conversing (and challenging each other’s ideas) for the past few years on the topic of education reform through email while he was enrolled as an math/engineering student at the University of Waterloo.  He has now started a new journey as a grade 5-7 teacher in Nigeria.  He sent me an email about his experience during his first 6 weeks; his narrative demonstrates the importance of working WITH students by building relationships through understanding.

On the first day of one of my creative writing classes, some of my students were acting up, so I asked them to stay behind afterwards. Instead of cussing them out (as was my initial plan), I decided to listen instead. I asked them what they wanted to be when they grew up, and what they enjoyed about school. One of the students said he wanted to be an engineer. After a few leading questions, he made the connection that to be a successful engineer, he would have to be able to write well. He’d have to be able to articulate his points, and outline his ideas in proposals. Since that class, he’s been very co-operative and friendly.

I’m also teaching Language Arts to a class of five Grade 7 students. All of them are quite energetic, but one of them takes the cake. He is always jumping around, spouting out random comments during the lesson and interrupting both his classmates and me while ignoring instructions. Even when it comes to his writing assignments, you can see the energy flying all over the page as he’ll frequently go from one idea to the next without completing the first thought. One day, I pulled him aside at lunchtime and spoke with him about the upcoming story-writing project. We talked about what he was going to write, and then he gave me a few of his ideas. They were all fantastic ideas, and he could have made a great story out of any of them. But then we talked about how it was important to create structure for his ideas. That he would be able to write a great story once he put his ideas into the framework and combine the structure with his creativity. After that chat, he started to pay much more attention to instructions, as he could finally see the value in them. Although he still gives me trouble occasionally, his behaviour has vastly improved. Some of the other teachers in the school have complained about him being difficult to teach, but he has been a welcome presence in mine.

In my Grade 5 Language Arts class, two of the students have exceptional difficulty reading at grade-level; when they failed to follow along with their classmates, they resorted to misbehaving, which set off a chain reaction of the other boys joining in and goofing off with them. Since the second week, I have had two hours per week of class time with just those two boys to work on their basic language skills. During those sessions, we joke around with one another, talk sports and keep the atmosphere really relaxed; but, we also get through the lessons. We’ll intersperse social and academic, while occasionally blending the two together to make the lesson individualized and relevant to their own interests. Over the past few weeks, they have demonstrated great growth in their comprehension abilities. As a bonus, their behaviour in the class has also substantially improved. Not only are they not acting up in class, they’re preventing their classmates from stepping out of line by calling them out whenever anyone misbehaves.

Only six weeks down, but I’ve learned first-hand so much about the importance of working WITH the students. As opposed to resorting to discipline as a first strike, I’ve been working to understand WHY the students behave the way that they’re behaving. As a teacher, it’s my responsibility to make the lesson meaningful to the students. In order to do that, I have to learn about what is important to them and figure out how to incorporate those values into creating a lesson that they will buy into. Only then will I be able to provide them with the education that they deserve. It’s been a great learning experience so far and it truly has been learning with the students.

Here are more thoughts from Kenny from previous emails…

I look forward to hearing more reflections from Kenny during his journey as a new teacher. Thanks for taking the time to share, Mr. Kou!