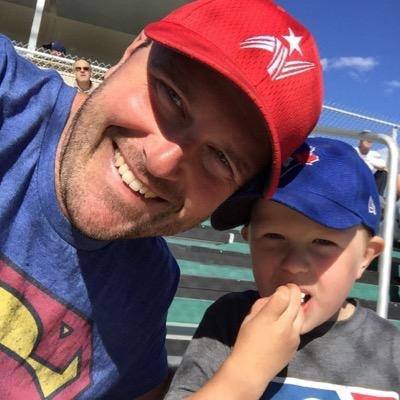 Back in January, we lost a true reformer in education and a close friend of mine, Joe Bower. I have not been able to find the right words to express the impact Joe had on me as a person and as an educator. Few people pushed me more in the areas of motivation and assessment than Joe did.

Shortly after we lost Joe, I sent his family a message that, although is not very “principal-like”, it was from the heart and it revealed a portion of what Joe meant to me and provided a small window into our relationship:

I came across Joe’s blog about 7 years ago and was immediately drawn to his progressive thoughts and ideas. He was not some philosopher spouting off ideas on what others should do… he was actually doing it. He was “being the change”.

I reached out to him on Twitter and this led to 6 years of Twitter chats, email conversations, Skype calls, text messages, and phone calls.

Joe not only made a difference to his students but also to our students. As we moved away from rewards and awards (as well as shifting the focus to more formative assessment) at our school, Joe became my go to guy for all things motivation and assessment. If I had a quick question, I would fire off a Direct Message on Twitter and he would respond with some advice that would help dialogue at our school.  If I needed more of a heart to heart conversation, we would Skype. He Skyped from his school, his home, and even his car – he was always there to chat and help move our school forward. I must have told him endless times that I owed him a beer… and he was always sure to remind me of this.

In 2012, Joe and I put in a proposal to present together at a conference in Calgary.  It was accepted and we were planning to present on moving away from rewards and awards – he would focus on the classroom side and I would focus on the school side. He would bring the teacher perspective and I would bring the principal perspective. Unfortunately I had to back out because of family commitments. I never knew that I would never get this opportunity again.

I never called Joe a close friend as we had never actually met. Now that he is gone and I look back at all those conversations we have had over the past 6+ years, I realize there are few people in my life that I spoke to more often than Joe. He was a close friend and, although we never actually spent time in the same room, he changed me as a person and as an educator. He supported me and challenged me in ways that every close friend would.

I am so thankful Joe blogged (I am sure there were moments that drove Tamara nuts as he was on the computer writing late at night).  He had so much wisdom and critical reflections that have been shared worldwide and will continue to be shared for years to come. He was a Canadian hero in education to many of us as he stood up and was able to say what so many of us thought. Many people disagreed with him but he stayed the path and was always willing to listen to the other side. His honesty (ok, he was blunt) was refreshing for so many.   He has helped so many educators worldwide move to a more positive method of teaching and parenting.

In addition to the regret of not presenting with Joe and meeting up for that beer, I regret not knowing him on a more personal level. We joked around about our families but I never saw the tender side of Joe as a father and as a husband. The picture of him with his kids taken by Loni left me sobbing as it was such a reminder of who he was and who will be needing him the most.

Someone asked me one time, “what will your legacy be?”. I know Joe has left an incredible legacy in the education world – one that will be carried on for generations. People will look back and say, “I actually talked to him one time” or “as Joe Bower once wrote…”.  He was an educator ahead of his time… and he took so much of the heat that has allowed us to make changes more effectively. He also has left a legacy with his friends and family as all his thoughts on child development were reminders on how we needed to rethink some of the things we were doing.

As many regrets as I have, I am so glad that I often shared with him how important Joe was to me. He knew the impact he had on my students and on me both as a principal and as a person. I thanked him many times.

As I looked through the hundreds of Direct Messages we shared since 2009, I laughed and I cried.  I saw the many invites we had to meet up and reminds me once again how Joe was the closest friend I had that I never had a chance to physically meet. He reminded me over and over again that I owed him a beer and we both knew it was our way of saying that we needed to meet up soon. He shared the greatest compliment to me one time as we were talking about his struggles at school.. In typical #BowerStyle as he said, “You are doing such cool shit at your school.  I would give my left nut to have you as my administrator”. He then added, “I wouldn’t give it to you literally… just metaphorically”.  🙂

I would give my left nut (metaphorically, of course) to go back and go for that beer.

I miss that guy so much. xoxo

Following his passing, I have been able to text and chat on the phone with Joe’s dad, Jim Bower, and he has shared so many awesome stories of farming, baseball, hockey… and family. He shared a video with me of Joe playing catch with his son… I cannot even think of that video without my heart aching. However, through this, I am finally getting to know the “other side of Joe” – the side that Joe referenced in the private conversations but also the side that so many of us in the education world never got to be a part of. Jim has also shared his desire to keep Joe’s philosophies and ideas alive through social media (check out our A Tribute to Joe Bower Facebook Page) as well as through Red Deer College, a place that Joe attended and was very fond of.

Many people have asked how to contribute to Joe’s legacy.  Last week, a new scholarship was announced at Red Deer College (shared by Joe’s friend and former colleague Ted Hutchings on the Facebook Page):

Please consider contributing to Joe’s legacy. Joe was a graduate of the RDC/U of A Middle Years Program. Yesterday, a new scholarship was announced at Red Deer College as part of the “20th anniversary celebrations of the Middle Years Program”. This scholarship will support middle level pre-service teachers who demonstrate a passion for learning. The scholarship, called “The Joe Bower ‘For the Love of Learning’ Memorial Scholarship, supports those students who need financial assistance to help pursue their education and become middle level teachers.

Not a week goes by where I don’t think, “What Would Joe Bower Do?”… whether it is about working with students that present unexpected challenges, or conversations on homework, or debates on assessment and motivation, I continually reflect on our dialogue and the ideas Joe shared.

Let’s work to keep the legacy of Joe Bower alive. Share his posts and please consider donating to the “Joe Bower ‘For the Love of Learning’ Memorial Scholarship Fund” to support future teachers in the middle years program.

My heart goes out to all of Joe’s family… as always, I send all my love. To them, I apologize for how long it has taken me to write this. I am so grateful to Joe’s family and close friends who continually reach out to me and the people in Joe’s community beyond Red Deer to maintain a small piece of that beautiful connection we had with Joe Bower.