In the past number of years we have gone through a very positive and significant transition at our school.  Through the work of the staff (current and previous), we have moved from a punish and reward mentality to one that is focused on creating the conditions for students to learn the skills to be successful. We have gone from long line ups of students at the office at the end of lunch to maybe one or two students ‘arriving’ at the office during an entire day.  Most of the issues we now deal with are minor and dealt with in the moment in a learning manner, away from “the office”.

So how has the staff of our school worked to create these conditions?

A few teachers and special education assistants often talk about “backing up to where they are” when working with kids.  When we discuss student discipline or “behaviour plans” we do not discuss what needs to be done TO the child but rather what can be done FOR the child.  Appropriate behaviour is full of self-regulation and social skills that needs to be taught; punishment and rewards do not teach.  There is no standardized boxed program (or one in a big white binder) that we can buy that will solve our discipline issues.  Students are individuals and the conditions need to be created that not only help school culture but also help the student.  At our school,  staff work hard to create the conditions so we can back up to where the student is and help him/her develop the self-confidence and social skills needed to be more successful in a school setting.

For about the past 4 years, we have had a group of boys that are the rough and tough jock type.  They have turned every square inch of our school and field into some sort of hockey rink at some point. I love these guys… I coached them at recess times when mini-hockey sticks were almost regular sticks to them; however, their drive  and ultra competitive nature often gets the best of them.  Last year, their aggressive play came to a head as we seemed to be dealing with some sort of minor altercation almost every day.  We banned hockey for a few days and then the game of choice became “touch” football (their definition of touch turned out to be different than mine).  It seemed like any activity they played turned into a physical battle. I met with a Special Education Assistant (who is also a supervisor at recess/lunch) as well as a few teachers (and phoned a parent who has a similar perspective on student discipline) and we asked the question, “what conditions can we create for these students to be successful?”.  The answer came to us: they needed a coach.  They needed someone nearby that could bring them into a huddle every now and then to have some reflective discussions so they could come up with their own rules to create more fair play in the games.  Also, this coach would help some students to understand when they needed a break to regulate their emotions.  We decided we would decrease the area in which they could play – not as a punishment but but to create the conditions for them to have an adult closer if/when needed.  This small group of boys decided they wanted to play soccer and have the supervisor nearby to help them with any disputes.  They came up with some rules together and then began the games.  What happened next was one that made me sit back and smile.  What started out as a game of 8-10 boys turned into a game of 12…. then a game of 16.  A week later there were over 30 students – of all genders, skill levels, needs, and ages – playing soccer in this small area.  The game had the conditions – a level of intensity coupled with a sense of fairness – that made these students all want to play. 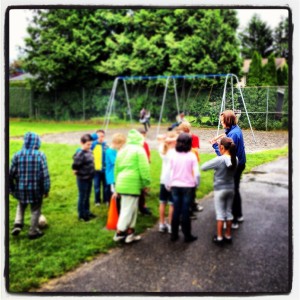 The start of something special – a few more students join the reflective huddle with the recess “coach”.

Of course we still have students that struggle with behaviours and some learn much faster than others; however, when we change the lens of discipline from one of punishment and rewards to a lens of skill development and self-regulation, we see students begin to develop and actually shine in an area of their life in which they once struggled.  There is not one main thing that can be pinpointed as something that changed the culture of discipline at our school.  Through the years before and during my time at the school, there has been dialogue on restitution, strength-based teaching, growth mindset, mediation, First Nation culture, awards ceremonies, leadership/mentorship, relationships, etc… all with a focus on kids.  All of these conversations have pushed us forward and provided us with more tools in our toolbox so we can work together to create the conditions for more student success.  We still have a lot to learn but I believe we are definitely on the right track.

All students are good kids – some come to school with more skills than others in certain areas.  When we have a student struggling with reading, we find ways to create a support network to teach the skills; this support network also must be developed when children struggle with behaviours.

Create the conditions for students to be successful: back up to where they are, support them through coaching, be patient… and watch them flourish.