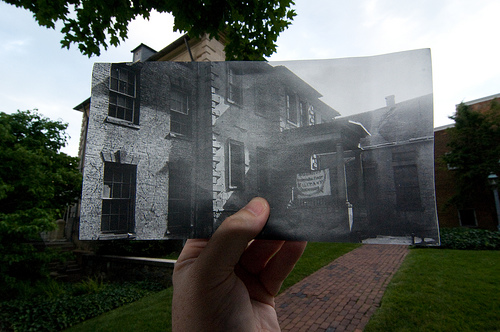 We often look to our past through a lens of  ‘that is how things should be done today’.  This past week I have read a few articles and posts about how we need to return to the old, better ways of doing things and how ‘kids these days’ are lazy and have such a sense of entitlement.

Inside the entitlement generation – The Globe and Mail

There are very few things that get me more frustrated than when I hear stereotyping of our future generations and the criticism of the new way of teaching.  Cale Birk (@birklearns) wrote a brilliant post in response to the Globe and Mail article title “Uphill Both Ways in A Snowstorm” that is a must-read.  In it, Birk states:

In my opinion our students of today are as intelligent and motivated as students at this age have ever been.  I would also say that students are much more well-rounded than I ever was–they are more socially responsible, more globally aware, and more tolerant than any generation before them.  When graduates cross our stage at commencements, I absolutely marvel at how involved they are in their academics, the arts, athletics, the school, and community issues.  I wish I went through high school with the same verve and alacrity that our students do and have done.

The belittling of our students and the newer forms of pedagogy does not help with the intergenerational relationships nor does it help with our sense of community.  Are some people trying to get our kids to fit in a box that no longer exists?   I wonder how many of us look back at “the way things were” and remember all the great things but possibly forget some things…well… not worth remembering?  How many of use try to move forward by romanticizing the past?  Do we criticize the new way of doing things because it is foreign to us and we fear the unknown?

Last spring, our district held a forum around 21st Century Learning that included educators (elementary, secondary, post-sec), community members, parents, and students.  At one point we were discussing the way things used to be.  A parent and a teacher spoke of how things were when they were growing up 20-30 years earlier.  A student then spoke – he said,

When I was a kid, we played all day long…  pick up football, baseball, biking, swimming.   We didn’t wait for adults to organize stuff for us. We would play until the street lights came on.  We weren’t so wrapped up in video games like kids are today.  We got off our butts and did stuff.  We weren’t always on the computer talking to each other, we were out there meeting with each other.  It’s a lot different now.

Then, with a whispered question from my assistant superintendent at the time, Scott Benwell (@sbenwell1), it hit me.  This student was barely 18 and he was saying the same things that other generations were saying.  So I asked the question, how often do we unintentionally forget about some of the less productive things we did and portray our childhood as something that is a bit different than it actually was?

I began to reflect upon the number of video games I played as a child – Commodore 64, Tandy, Coleco, Atari, Nintendo – I played it all and my parents were ALWAYS on me to get outside and play.  Do I ever talk about the glory days of playing Blades of Steel or Mike Tyson’s Punch-Out? Nope!  According to my stories, my childhood only existed of building forts in the bushes, mountain-biking in the trails, and playing street hockey with the hose-running so we could get a drink and then complaining about having to go in when it was dark.  I have been part of MANY conversations where I have romanticized my past as something that was close to perfection and failed to mention the ‘less constructive’ activities in which I was involved.

Last weekend, I went for a jog around my community (and believe me, I do not run very far) and here is what I saw:

Have things changed? Indeed they have.  Do we have different challenges? Definitely…. but slamming our current practices as well as our future generations by labeling them as lazy and less educated because they have learned to do things differently does nothing more than drive a huge wedge in our relationships.

Can we actually move forward as a society by romanticizing the past?  We definitely need to learn from our past but the key is to make sure that we are realistic about what actually occurred during these times.  Personally, I don’t think my generation and those before me have done a bang-up job of creating a clean, peaceful, and equitable environment for our children so maybe we need to be careful on how we remember our earlier years.  Should we actually be moving toward a traditional “back to the basics” model of education that may or may not have created successful students of previous times or should we continue working toward creating an environment for our students to be successful now and in THEIR coming years?  Eric Hoffer wrote:

In times of change learners inherit the earth; while the learned find themselves beautifully equipped to deal with a world that no longer exists.

In order to move forward, we need to support the future generation in a way that we create an environment of learners rather than those that have learned.  Education never ends for us; there is no point when we suddenly become educated and stop needing to learn. We need to be careful when we judge new ways of doing things as being inferior to ways in which were done when we were at that age.  So, as Cale Birk wrote:

…the so-called ‘entitlement generation’ is THE generation that is going to lead us over the next several decades in technology, innovation, research, and global issues.

Are we going to support them by romanticizing our past, stereotyping, and telling them they need to be like we were 20-30-40 years ago or are we going help them move forward by learning from our past and working with our students to create an environment for them to flourish NOW?

Thank you to Scott Benwell, Cale Birk, and David Wees for inspiring this post.