A few years ago, as a new principal, I made a decision to recognize the children for “making a difference” at our school.  The idea was that at our monthly assembly, all staff members would have an opportunity to publicly thank and recognize any student that he/she felt had a made a difference.  Things started out well.  Kids were excited to be recognized.  Students seemed to be doing more around the school and letting us know about it… then after recess one day Ashley (pseudonym) and another student arrived in the office:

Ashley showed up helping another student walk.  The other student was crying and had an obvious scraped, bleeding knee.  Ashley was a primary student who had a number of behaviour concerns and reward/incentive programs were being implemented both at home and at school.  I was so happy that Ashley had decided to use her efforts to help another student…. but then it happened – the ‘Aha’ moment for me.  As soon as she saw me, her attention moved from the injured girl to me, she stopped helping the girl and said to me, “Mr. Wejr, I helped Susan to the office when she was hurt! Can I get one of those “Making A Difference” awards now?” (cue alarms going off in my head).  I stopped right there.  What had I done? Had I just taught this child to help another student not for the reward within the act itself but for the reward of being recognized at an assembly?  My response (not quickly thinking) was, “Yes, you will be recognized but….”  Before I could finish, she was so excited that she skipped off with no concern for what I was saying nor concern for the injured girl.

This recent story illustrates the unintended negative consequences that reward systems can have. I know that majority of teachers and schools make decisions based on what is best for kids and there is no intention of harm but are we, in fact, doing more harm than good by offering incentives for certain behaviours?

We often hear of schools that use merit tickets, gotchas, prizes, etc to encourage students to behave a certain way.  Before I go on further, I need to say that these systems work; they are successful… SHORT TERM.  These systems get students to comply to the rules that we set out but do they actually help to internalize their actions? 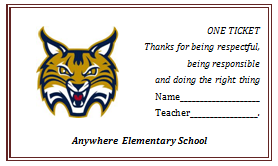 We have not used a school-wide reward system for a number of years (other than my error of implementing the “making a difference” idea); the previous principal and a number of staff members were opposed to motivating kids with incentives and “stuff” (by rewards an incentives, I mean tickets, candy, money, prizes, etc).  Instead of rewards, we provide descriptive feedback on how children could improve as well as what they have done well.  We try to praise their efforts rather than the results of their efforts.  We also honour each child for who they are rather than what they do (without awards).

I recently read a blog by a BC administrator, whom I truly respect and admire, called “Beyond Discipline or Beyond Common Sense” but I have concerns and questions on the promotion of the use of merit tickets.  In the story, he discusses how the use of tickets caused the misbehaving boy to change his behaviour and instead focus on getting caught being good.  To grow as an educators, I want people to challenge  my current opinions, so here are my concerns/thoughts/questions with this:

Now, I do not intend to make this an intrinsic vs extrinsic, PBIS/non-PBIS (Positive Behaviour Interventions and Support) debate.  Motivation falls on a spectrum and I feel there is value in both (ie. praising effort as extrinsic).   Also, The PBIS system has a number of effective practices; my issue is with the behaviourist view on use of rewards.  I know many who use the rewards system in PBIS cite the research done by Judy Cameron of University of Alberta and I could make this blog even longer and cite the words and/or research written by some educators, economists, and psychologists.  Instead of this, here is a list of people that discuss the problems/concerns of rewards-based programs but I encourage you to research their ideas:

As someone who previously used tickets (Weej Bucks, Bobcat Bucks) as a classroom teacher and also as a principal who has observed the negative impact that a reliance on incentive-based systems can have, I challenge and encourage you to reflect upon the current practices and determine if the rewards like this are actually needed.  What if we just did the following:

If we did these simple things every day with each student (obviously some would need more support than others), would there be a need for tickets and other prizes?  In my experience, the answer is no.  I have observed classes and schools that have respectful cultures that do not rely on incentives.   Do we have the perfect school in which every one behaves respectfully all the time? No, we have some incidents of disrespect and inappropriate behaviours just like other schools but we approach each incident with a learning/growth mindset and, although it is much more difficult and it takes much longer, we continue to see long-term learning without the need for prizes.

For those who often cite the workforce or the real world to support the argument for  the use of rewards, I will leave you with an example from the “Motivational Guru” Dwight Schrute:

For another video that compares this to the thoughts of Alfie Kohn, please click here.

Thank you to Tom for making me think and reflect on this topic. As this is an often debated issue and this is based on my opinion, I look forward to reading your comments.