Do you remember having penpals? I have fond memories of connecting with other kids from Japan and Australia as an elementary student. I also remember being so jealous when one of my classmates was able to actually meet his penpal face to face at Expo 86 in Vancouver.

I recently attended two conferences (well, one was an unconference) in Vancouver – EdCamp Vancouver (#edcampvan) and the Digital Learning Spring Conference (#edtechbc). My conference experience PRE-social media usually went something like this: I would arrive at the conference last minute, attend the keynote, listen to the presenters, take notes, and go home. I rarely knew anybody and I was not the person to just walk up to someone and introduce myself. I was a receiver of information and took part in very little educational dialogue. 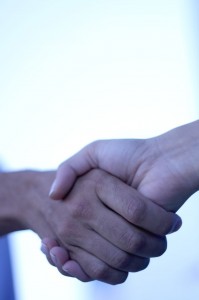 Flash forward to life after Twitter and blogging. For the past 2 years, I have connected with thousands of educators from around the globe; more recently I have connected with quite a few educators from BC. Prior to EdCamp, I posted a Tweet asking who was attending and I also posted some presentation ideas on the EdCamp site. Through this, I was able to have conversations even before the event started; I even arrived early to EdCamp because I was so excited to actually meet some of my Twitter friends face to face. When I walked into the library, I can think of no other way to describe it other than it felt like I was meeting my penpals for the first time. I felt I knew these people so well: I knew their values, their educational philosophies, and even a bit about their families. Instead of sitting in the corner waiting for the next presentation, I found myself seeking out educators and having powerful dialogue with people who I felt like I knew. I said to Heidi Hass Gable at one point “I have never met so many people for the first time… Whom I already knew”. There were plenty of smiles, handshakes, and even hugs as so many people were excited to connect with those who they had been “speaking” with for the past few months or years. (You can read more about my EdCamp experience here). I think this comfort level lead to the ongoing powerful challenging conversations that occurred throughout the day.

Two days later, I attended the #edtechBC conference which was keynoted by George and Alec Couros. George is someone who, prior to that day, had never met but have had endless chats through Twitter, blogging, email, and Gmail Video chats. I walked into the room just before he was about to present, he saw me, gave a wave and I think he wrote it best when he tweeted: 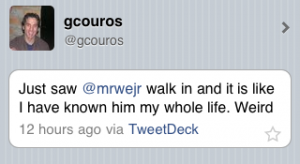 I have always realized the power of social media as a professional development tool; I never could have imagined the resulting connections and face to face relationships. These relationships will never replace those within my school and district but social media has added so many passionate people to my professional learning network and, combined with conferences, truly has led to the feeling of meeting old friends for the first time.

Here is a list of people whom I connected with face-to-face for the first time (and a few whom I had the pleasure of reconnecting – if I missed you, I apologize!!!):

Thank you to all those that helped (and continue) to make my learning experiences so powerful!