As we near July 1 and have the opportunity to join millions of Canadians celebrate Canada’s 150th birthday, I cannot help but think about those who will not exactly be celebrating the past 150 years.

As a school, we have been discussing and learning about history from an Aboriginal perspective – a perspective that was not taught to so many of us adults as we went through school. When I was in school, I learned about the colonial perspective and how Canada was “discovered” and how our “peaceful nation” was built.  I grew up knowing that my family was a settler but I was not aware that I was living on lands that were taken nor did I know about the many atrocities that have been done to Indigenous Peoples of Canada. I actually work near “the Fort” in Fort Langley but I have never taken the time to hear the stories of the Kwantlen People who have to stare across the river at this Fort, which represents so much loss to their families, lands, culture, and language.

In the past 10 years, I have learned a narrative that has made me seriously question the story of Canada as a peaceful nation. Through my work in education, I have had the chance to listen and learn from Indigenous leaders both directly involved in education (teachers, support workers, education committee members, etc) and in local communities (particularly from members of the Sts’ailes, Seabird, and Kwantlen First Nations). I have learned more about the horrific genocide that has taken place in which Indigenous families had their children taken from them along with their language and culture (and the incredible resiliency of the survivors). In the past 150 years (and longer), the Canadian government used tools of oppression such as Indian Residential Schools (in which children were kidnapped from their families and sent off to a school run by the government with the goal of “killing the Indian in the child”) and methods such as the 60s Scoop (in which Indigenous children were taken from families and placed in foster care); these violent acts in our history move us far away from having the identity of a peaceful nation that has been embraced by so many of us. 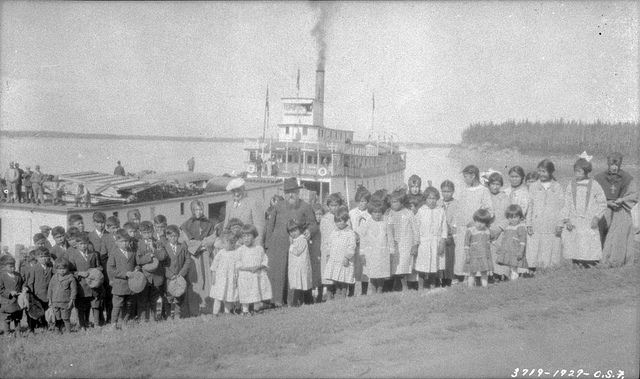 We need to continue learning our history as a nation and reflect more deeply on the past 150 years.  National Aboriginal Day is on Wednesday, June 21 and I believe this is a great opportunity for educators, students, and families to ask the following questions:

If there is evidence to show that people have been here for over 10,000 years, combined with the effects of colonialism (including the fact that Indigenous Peoples were not even invited to the “birth of Canada” in 1867), you can see why some may not be so big on celebrating “150 years”.

Many of us are proud to be a Canadian but we must also understand that not everyone has lived the privileged Canada that we have experienced; there is a significant portion of our history, some of which continues today, that is not respectful, peaceful or equitable. As a nation, we have much work to do on the journey towards reconciliation. This starts with acknowledging that a settler perspective of our history is vastly different than an Indigenous perspective. We must build an understanding of our real history as a nation and then move to action to reconcile with Indigenous Peoples in Canada.

I realize that for many people there is much to celebrate on July 1 and many will still be excited to attend festivities for Canada’s 150th Birthday.  Having said this, I encourage you to take the time to not only attend the celebrations, but ask the aforementioned questions, and learn more about historical oppressive practices like forced moves to “reservation land”, stealing children to send them to Residential Schools, and removing children from families through the 60s Scoop. For regrettable aspects of Canadian history like these, it is no longer ok for us, as Canadians, to say that we didn’t know. If we fail to acknowledge and understand the Indigenous perspective of Canada’s 150 years we continue to promote a colonial culture and further marginalize Indigenous Peoples in Canada.

Enjoy July 1 but please work to be more wide-awake to a different perspective of the past 150 years in Canada.

See below for videos that share some history from a perspective adults were not taught. A powerful quote, “we cannot cling to our ignorance”. (Thank you to Bonnie VanHatten for sharing and for her continued mentorship)