Every day, during recess and lunch, I supervise 25-30 primary students (K-3) in the game of mini-hockey.  This is often the best part of my day and is a great opportunity for me to work with these students on topics such as conflict resolution and sportsmanship.  For example, if a child slashes another child, we work to determine a solution to the problem that does not involve slashing back.

It is very evident that these youngsters idolize and emulate their favorite NHL players; from jumping over the boards (or in our case bike racks) to post-goal hugs to goal celebration activities, these students characterize themselves as players like Alex Ovechkin and Sidney Crosby.  They know everything that has happened the night before in the NHL and this topic consumes much of their conversations. 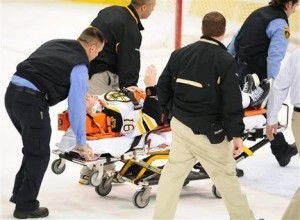 During the past few weeks, the sports talk shows and highlight shows have discussed at length and shown a certain controversial NHL hit by Matt Cooke (PIT) on Marc Savard (BOS).  If you are unfamiliar with this, I will summarize:  Marc Savard of Boston had the puck and skated across the opposing team’s blue line, he shot the puck, and just as he did this Matt Cooke of Pittsburgh hit him with his shoulder/elbow directly in the head.  Savard did not see this coming and fell to the ice unconscious; word is that he will not play again this season due to a serious concussion.  The NHL reviewed the hit and then decided that the hit was within the rules and did not warrant a suspension.  Although I have a huge problem with this hit, I have more of a problem with the comments and events that took place following this act.

Following the game, the Boston Bruins management stated that they were disappointed that the Bruins players did not “stand up” for Savard by going after Cooke.  The Boston media and other sports media players throughout North America also piped up and stated that the game the following week between the Bruins and Penguins would be a chance for the Bruins to get redemption and for Cooke to answer the call, drop his gloves, and be a “real man”.  Comments were made like (and I am paraphrasing) “Cooke needs to fight if we wants to gain back any respect from the league” and “because the NHL did not suspend, the Bruins will have to take this into their own hands and make Cooke pay for what he has done” and “what if the Bruins go after Sidney Crosby?”.  The Boston newspaper had Cooke’s face on the front page with the words “WANTED”.

When the Bruins and Penguins finally faced off earlier this week (in the game following the Cooke hit), less than two minutes into the game, Bruins fighter Sean Thornton decided to drop the gloves with Cooke.  Cooke fought Thornton, took a few punches to the face, and then went on to help his team defeat the Bruins 3-0.  In the days following this game, the media was at it again as writers, sports show hosts and callers supported the Bruins for the challenging of Cooke and stated that Cooke gained a little more respect because he answered the call.

DISCLAIMER – I am a hockey nut.  I even used up much of my university savings to attend many games during the Canucks memorable 1994 playoff run.  I have played hockey since I was 5 and I continue  to play in adult hockey leagues.  I love hockey and I love the NHL and I understand that fighting and hitting is a part of the NHL game.

Here is my concern with all of this.  THE PROBLEM IS THAT MARC SAVARD WAS HIT IN THE HEAD BY A CONTROVERSIAL BODY CHECK AND MAY HAVE AN INJURY THAT WILL AFFECT OR END HIS CAREER.  The reality of this is that nothing that is done now can change that – no amount of fights with Matt Cooke – no amount of PAYBACK will bring back Savard.  So what does all the payback talk teach our kids?

I spend many days a year having conversations with students about the payback circle and how that does not solve the problem or change the past.  I understand that, with boys especially, being fair is extremely important.  We discuss scenarios like if a boy gets punched, other than punching back, what can be done?  Many angry students have succeeded in finding other ways to deal with their emotions – ways that have helped them contribute positively and not in a way that creates harm to another person.  We discuss how we cannot change the past, only focus on the present and how our actions today affect our future.

During the past few weeks, many of my previous conversations with students were negated by talks that went on throughout the hockey world.  Talks that state that everything would be better if Cooke fought or if the Bruins took out a Penguins player have now been played into the minds of our students.  The problem was the fact that Cooke tried and succeed in seriously injuring another player… so how does Cooke fighting a different player a week later solve that problem?  The sports media and NHL players have just told my students that if someone hurts one of your friends, and you do not agree with the disciplinary measures, the way to deal with this is to pay them back through fighting or hurting them.

The actions and statements by people during these events have been a huge unfortunate lesson to our young NHL fans; payback is the answer.  Most adults differentiate between the NHL and life outside of hockey; however, many of our students do not.  I will continue to have peaceful, positive conversations with my students around conflict resolution but the events of the past few weeks have definitely made this more difficult.  We want our students to be safe, happy, and contributing members of society that do not resort to violence to solve problems.  As much as I love hockey and I love the NHL, I think that the NHL and the media dropped the ball on this one and instead of teaching Matt Cooke a lesson, they taught our young children a lesson.